Surviving Dreamforce: Tips from a Pro 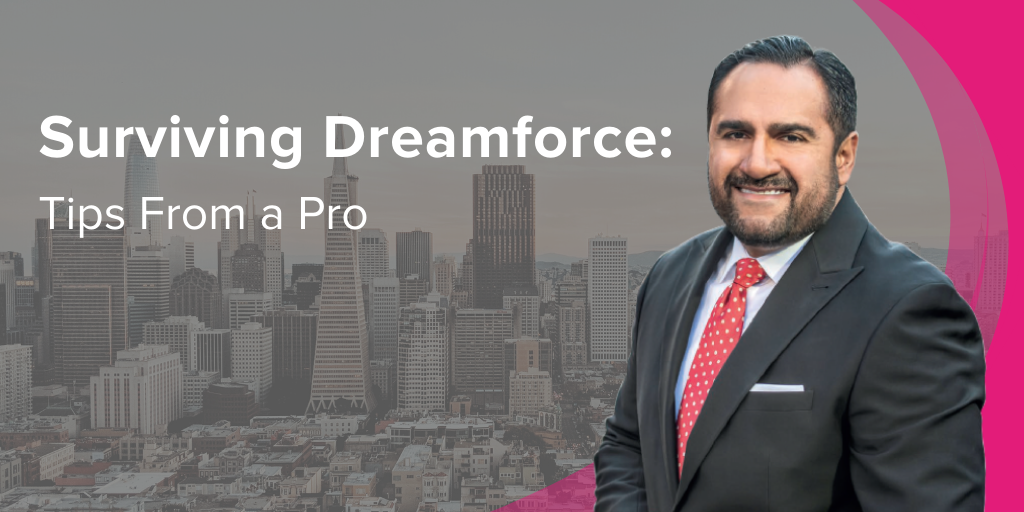 This year I will be attending Dreamforce for the 8th time. And every year, I’m amazed to see how far Salesforce has come and what they’ll do next.

Dreamforce is probably one of the most informative and distracting events in the business. Informative because there are thousands of sessions available to help transform the way companies go to market and service their customers. Distracting because, well, you’ve never seen anything like it.

How to capitalize on Dreamforce

Dreamforce can get overwhelming and you’ll feel like you’re being pulled in a million different directions. That’s why you have to have a plan. My best advice is to pick two topics you want to focus on – say marketing automation and digital selling for example. Go to Dreamforce and surround yourself with both Salesforce and partner events that support those things. If you go in knowing what you want to learn and have sessions and events selected, you won’t feel like you missed out.

I say don’t say that you’ll “follow-up” after Dreamforce because the odds of getting engaged with someone are slim to none, especially because it’s the week before Thanksgiving this year.

Pro Tip: Instead of saying you’ll follow-up after a meaningful conversation, book something right then and there. Putting something on a calendar on the spot while the person remembers you and cares about what you said means they are far more willing to commit to additional time to hear what you have to say. Book a meeting 2-3 weeks after Dreamforce so the holiday hubbub has subsided and both parties can focus again.

That being said, if you’re holding a session during Dreamforce and people had RSVP’ed but end up not attending (which, believe me, is understandable considering everything that comes up) don’t drop it. They expressed interest in the topic, so those are the other group of people you have a chance to get a conversation with later.

Speaking of, the absolute worst way to follow-up is with a generic “thanks for stopping by our booth” type email. Generic emails are the kiss of death! Be honest with people. Tell them you know Dreamforce is crazy so since we didn’t get a chance to connect then, let me buy your team lunch while I bring my Dreamforce pitch to you.

The Dreamforce survival tips no one else tells you

#1 – The most important thing I always tell my team during Dreamforce is to be in bed by 10pm. Quite frankly, nothing good happens after 10 o’clock. You’ve been going hard, starting your day as early as 7am and haven’t stopped all day. Ending your night at a decent time makes a huge impact over 4 days. You’ll have the stamina to make it with enough rest.

#2 – Be direct in your conversations. With the volume of people you talk to, you’ll find very quickly that there are interests that align and there are interests that don’t align. Tell the person you’re talking to this isn’t a priority for us right now but I’d love to take your card and follow-up with you (and I bet they won’t reply unless your interests do eventually align). Being direct helps everybody.

#3 – Find a really good place at Dreamforce to decompress. You’re going to need it at some point during the day. Besides, Dreamforce is always crazy, so you can either be involved or step away from it. Salesforce does an amazing job setting up tables and chairs all over the campground. Make time to find a quiet spot and call home, catch up on email, or close your eyes and put your feet up for a minute.

Pro Tip: The majority of the people at Dreamforce aren’t from San Francisco or even California. When’s the last time you enjoyed San Francisco? Take time for yourself to enjoy what the city has to offer you as a form of reflection and meditation. It’ll help you get through the long days and give you memories for the future.

The best part about Dreamforce

What I get really excited about as Dreamforce approaches is reconnecting. I started at Salesforce when they had less than 5,000 employees. I’m proud to still be part of this. The Salesforce Ohana has brought me to PROLIFIQ, and now we are fulfilling the vision they had 10 years ago by building a robust ecosystem as an ISV partner of theirs.

I’ve actually developed friendships through Dreamforce, so I get to reunite not only with those friends but also with colleagues and business contacts. Seeing how people’s careers have evolved is really cool. At Dreamforce, you have the opportunity to meet people from all over the country and all over the world. I go knowing I’ll see hundreds of people that I never get to see otherwise. Dreamforce connects people, so take advantage of it.